When I thought of coming to Nepal the first thing that came to mind was my expectation
of beautiful scenery, epic mountains, and challenging trekking. What I didn't expect was
to take such a liking to wilderness first aid. After our week in quarantine, we took an hour-long bus ride up to the mountains of Hattiban. The fresh air, quiet, and green was a
welcome change from the hustle and bustle of the city of Kathmandu. We slept in tents
for the first night of many more to come and there was excitement as we all realized
the program was officially starting.

The first section of the entirety of our 90 day trip in Nepal was Wilderness First Aid.
We sat in a circle of logs, pamphlets in hand and facing a whiteboard ready to learn. I
had never done any previous medical training and was surprised by how much I
enjoyed it right off the bat. Being a first responder—actually being the first person on
hand to help someone who’s seriously injured in the wilderness—isn’t something to be
taken lightly. 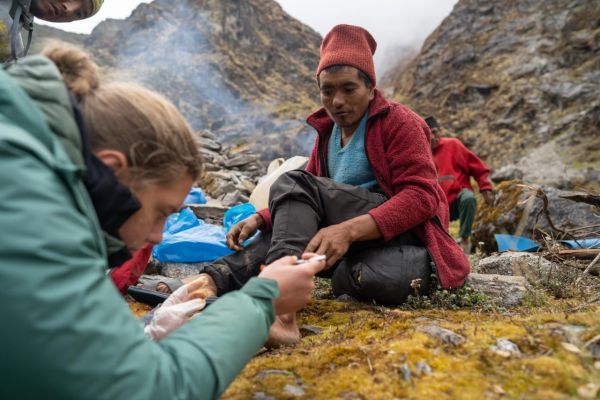 I loved the strength, calm, and control we were required to show as the first
responder to an incident. Our instructor Chandra led by example demonstrating how
important this would be. His hands were always steady and sure, constantly reassuring
the patient that he knew exactly what needed to be done.

We learned how to splint broken bones, beam patients to safer places, and how to
stop bleeding quickly. It was an intense week; 5-7 hours of hands-on classwork
practicing our skills over and over until we’d perfected them.

The highlight of the course was definitely the scenarios we had to deal with. They
ranged from practicing the Heimlich maneuver on a choking victim—where we recalled
the crucial importance of first checking the victim's airways— to scenarios with multiple
victims lying crumpled and piled on top of each other with everything from spinal injuries
to hypothermia, broken bones, and impaled limbs. We learned quickly through these
scenarios what steps came first and which ones were most critical in keeping a patient
alive in an emergency situation.

The adrenaline that came with these scenarios had me hooked from the get-go.
Although I knew it was just members of my team acting, there was an intensity that I
loved. I learned lots extremely fast and by the end of the 5 days felt I could address a situation with a calm and collected head. Starting the course as a group of strangers, having to lift and treat each other as patients was a great way to build a sense of familiarity with one another and collect funny stories that we’d retell for the rest of the trip.

At the end of the course, we all successfully passed a written assessment with the
assurance that we would continue to build on the skills we learned from this course
throughout the rest of our time in Nepal.

Given how taken I was by wilderness first aid, and would love to possibly pursue it
after the course ends; all the instructors gave me many opportunities to observe
multiple real-life medical scenarios we encountered along the Langtang trek.
The first scenario that arose was at the end of a 5-kilometer day trekking in Langtang
National Park. When we finally got to camp that day—an open space by a tea house
and small hostel—Chandra came to me and mentioned that a local working at the
hostel had burned his foot badly while cooking. He suggested I accompany him to
check it out and a couple of minutes later we were observing the man's foot. It was bright
red, swollen, and had huge blisters in the surrounding area. We grabbed our team med
kids and before long a large group of locals encircled us watching intently. I sat right
next to Amrit supplying him with gauze and scissors as instructed. First, he cleaned the
wound and surrounding area by soaking it in warm saltwater. He then dipped the gauze
in an anti-bacterial solution, rubbing vigorously to make sure it was clean. All the while
Amrit talked in Nepali, his tone calm and soothing as he worked with efficiency and
precision. I listened intently for the switch from Nepali to English as he instructed me to
sanitize a safety pin using an open flame. Once the tip was red, he used it to pop the
large blisters. Amrit finished his treatment by applying anti-bacterial cream and
wrapping the wound. Despite the severity of his wounds, the man barely flinched. He
chatted to Amrit and asked where I was from. 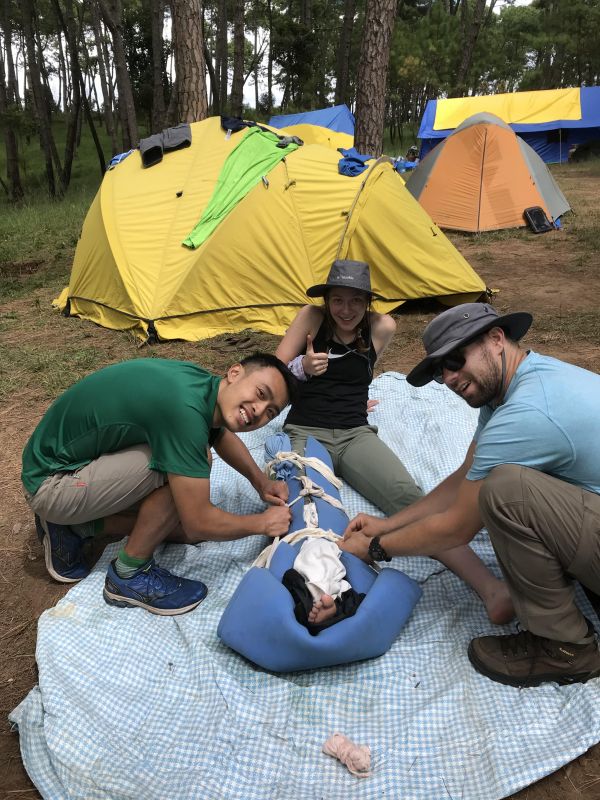 We stayed sitting as Amrit and Chandra translated some of the porters’, that were with
us for the trek, stories. One man, Memba, had been attacked by a bear in his village. He
lifted up his shirt to reveal a scar right where his arm connected to his shoulder, and
Chandra translated for us that his entire cheekbone had been completely detached
forcing him to spend much time in the hospital.

Later on in the trip, the same man, Memba, developed a foot infection. We had just set
up our tents in our new camp and were warming our hands up with mugs of hot tea
when Pasang asked if I wanted to help with the man's foot. He addressed me as Doctor Parker and we both chuckled as he unzipped the medkit. The man's foot looked much better than it had the day before, when Emil, a member of our team, had cleaned it and applied ointment. The area was much less swollen and pussy but it still looked sore and infected. I put on gloves, cleaned it, and applied more antibacterial ointment.

On our last day of the trek, about an hour before the bus that would take us back to
Kathmandu arrived, Amrit called me over again. I grabbed a medkit and joined him
squatting beside a local woman seated on the ground. I immediately spotted her hands
over his shoulder. They were both very infected with painful crusted sores all over. I
asked what happened and he said an allergic reaction of some kind. He told me to put
on gloves and called me Doctor Parker; I smiled, both at the new nickname and also my
excitement that he was allowing me to take the lead on this one. Her hands were
currently soaking in warm saltwater and I used gauze to scrub the dirt out of the wound and
peel off some of the crusted over the skin. I asked him to ask her if it hurt, and to my
surprise, she said it didn’t. After thoroughly scrubbing, Amrit took the anti-bacterial
solution and poured it directly on her hand. She didn’t flinch at all as I rubbed it into the
wound. Lastly, I applied a healthy amount of anti-bacterial cream and watched as Amrit
wrapped her hand, explaining to me the knot he was using.

I wasn’t expecting to come to Nepal and find something I felt so good and capable of
doing. Throughout the course thus far I’ve had experience either treating myself or
helping someone else treat multiple patients. In addition to this, I’ve been able to talk to
Amrit, Chandra, and Pasang about their qualifications and experience in the medical
world. I’ve been able to hear Pasang tell stories of Everest avalanches and the search for people the day after and the real-life stories of Amrit giving an elderly man CPR on a hiking trail in the US. I’m
extremely grateful to be able to learn something I find so interesting from people with so much knowledge and experience and who have helped so many others. I’m looking forward to seeing where I can go and what I can do with the wilderness first aid skills I’ve gained from this course.